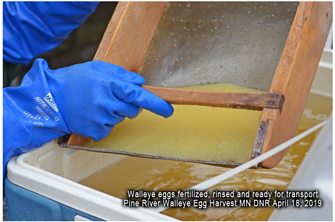 Driving past one ice covered lake after another hardly conjures up images of spawning walleyes. But ice covered lakes aside, there they was a nice bunch of fat walleyes waiting patiently in the trap nets at the Pine River Walleye Egg harvest Station when I arrived.

Over the next few hours, the female’s eggs would be harvested, fertilized, cleaned up and shipped off to the MN DNR Hatchery at Brainerd, MN.

As I pulled into the driveway, I was struck by how modest the operation is. Everything that the MN DNR Fisheries Staff uses to complete the capture and harvest of walleye eggs is contained within a tiny one room cabin located on a small, 100 foot cabin lot. A steep stairway leads down to the dock on the Pine River, just few hundred yards from where it flows into Upper Whitefish Lake.

I was greeted there by Brainerd Area Fisheries Supervisor Marc Bacigalupi who along with his crew, were suiting up for day 3 of the harvest which could continue for upwards of 2 weeks, depending on the weather and fish movement. The goal for 2019 is to harvest about 685 quarts of eggs, when the goal is reached, they close down the operation. 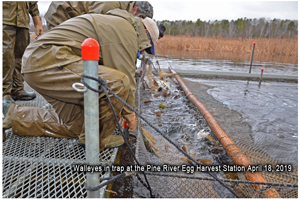 While there may have been a “slow-down” compared to day 2, there were still plenty enough fish to get my attention this morning. Besides, any deficit in overall numbers was more than made up for by the impressive average size of the fish. I don’t believe I saw a 30 inch fish on this trip, but there were several females in the 26 to 28 inch range.

After a period of gathering, assessing and sorting, the fisheries staff has the work station prepared for separating fish into 5 stations.

The first, a pen in the river containing “green” female fish, ones in which the eggs are not yet fully developed. These fish will be checked again every day until either the eggs ripen and can be harvested, or until the day that fisheries staff reaches their harvest quota and these fish are no longer required.

There’s a second pen in the river that contains male fish held over after they have already been “milked”. These fish are kept as a contingency against any shortage that may occur later. If the ratio of females is higher than average, these hold over males may be required to volunteer their services again more than once. 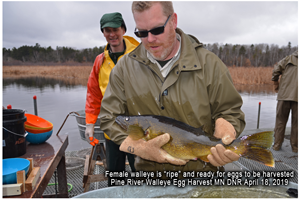 On the dock, there are two stock tanks filled with fresh water. One for ripe female fish from which the eggs will be harvested and the other tank to hold males that will be used to fertilize the eggs.

Finally, there’s one last stop, a station where the fertilized eggs will be rinsed in fresh water and placed into coolers for transportation back to the hatchery.

One person squeezes the eggs, usually from two females; another one squeezes enough sperm from male fish to fertilize the eggs. It could take anywhere from 2 to 4 male fish to provide enough volume to cover all of the eggs. The eggs are stirred for 30 to 45 seconds and then coated with slurry of Bentonite, a clay substance that coats the outside of the eggs so they won’t stick together. After they have 4 bowls of fertilized eggs, they’re delivered to the cleaning station where the excess Bentonite is rinsed off and fertilized eggs are packed for transportation.

The eggs incubate at the hatchery for just a few weeks before hatching and are then stocked into lakes, primarily as fry.

A quote from the MN DNR website says; “"When done well, stocking can work wonders. Hundreds of Minnesota walleye lakes would today offer little or no walleye fishing were it not for regular stocking.” 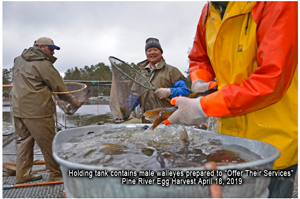 Managing lakes in the Brainerd region, Bacigalupi acknowledged the value of walleye stocking for his constituents; “Except for a handful of small lakes in our service area that pull off an occasional strong year class of walleye, most of the popular ones depend on stocked fish to provide anglers with good opportunity to catch walleyes. We automatically stock 5% of the total hatch back into Whitefish Lake, in 2018 that was about 5 million fry. Popular Brainerd area lakes like Gull, Edward, pelican and North Long are also highly dependent on fish stocked from the operation.”

While most of the fry will be stocked into lakes within Brainerd’s regional service area, some walleye anglers outside of the Brainerd area benefit from these fish too. ”In 2019, some of the fish, about 80 quarts will wind up at Waterville and another 100 quarts are slated to be sent to Glenwood”; Bacigalupi says.

While they were working, I asked fisheries staff at the dock to compare how many of these fish would, if left alone to continue upstream would go on to spawn and produce offspring. The consensus was that it’s debatable whether or not any of the walleye eggs would hatch. Owen Baird; “we’ve never been able to observe good numbers of native fish in our testing. There are a few places where they would have potential to spawn, but even if they do, the percentages of success would be in the low single digits.”

At the hatchery, these Mississippi River Strain Walleye have a hatch rate success of over 60%. That’s at least ten times the success rate that the same fish would have in the wild, probably more.

Personally, I really enjoyed the trip over to Pine River because the scenery is gorgeous, the fisheries staff was wonderfully instructive and the walleyes were beautiful.

Fans of walleye fishing, I think you owe it to yourself to pay a visit to one of these spring walleye egg harvests; if for no other reason, just to see the fish. But I think too that it would do folks a lot of good to see firsthand the effort that goes into making our lakes fun to fish.

There are a lot of good people working to give us an opportunity to bend a pole, there’s a lot to be proud about and I think “seeing it” helps make “believing it” a lot more fun.

I guess this is the time when I make my perennial pitch about buying a walleye stamp. It’s easy to say no to pay the extra 5 bucks, but when you think about it, there is no reason for any walleye angler not to buy one. If you’ve thought about it and you’re still on the fence, let me take a swing at convincing you. Just follow this link to learn more >> Minnesota’s Voluntary Walleye Stamp