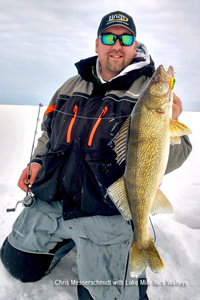 A few weeks back, I wrote about ice fishing for walleyes on Lake Mille Lacs with Dustin Monson. That was a fun fishing trip and it, along with a couple of other pleasant experiences down there this winter, really helped solidify my respect for the lake. I’ve seen that if you really want to make something happen on that lake, you can.

One thing that I really wanted to make happen on Mille Lacs was to fish with Dustin again. But there were a couple of other guys I wanted to fish with down there too and I was running out of time. With the inland walleye season ending on February 24, 2019 and me scheduled to work at the Ray’s Marine Boat Show next weekend, this was slated to be my last walleye fishing of Minnesota’s inland season.

So I had an idea, what if I invited 3 guys who’d never met each other to join me for one last day on the ice at Mille Lacs?

The idea was a good one I thought, and luckily for me, Dustin Monson, Shane Boeshart and Chris Messerschmidt all loved it too. It wasn’t really a hard sell, because in this age of social media, these guys were familiar enough with each other to know the day would be fun. So at 6:30 on Saturday morning, I and the Hippie Chick met up with the boys at Mille Lacs and began our adventure.

I was happy to learn that ice conditions on Mille Lacs are vastly better than they are up here in northern Minnesota. There’s a foot or more of crusty snow on the ice, but it’s dry and there’s no slush lying under it. Unfortunately though, the snow cover is deep enough to prevent driving vehicles off road, so traveling to his fishing area by truck was out of the question. Dustin had discovered a user developed road that led in the right direction, but it dead ended at somebody’s wheel house and was too narrow to allow either parking or a place to turn trucks around.

We did have my snowmobile though and decided to shuttle Dustin and his gear out to the flat first. Then while Dustin got set up, I went back, picked up Chris and his gear. Shane followed us most of the way out on his ATV, but it was stuck within 50 feet of leaving the narrow road. We reasoned that we might as well fish while we could, and get the ATV un-stuck later, so I shuttled Shane to the flat too and then returned to the landing for my wife and my gear. 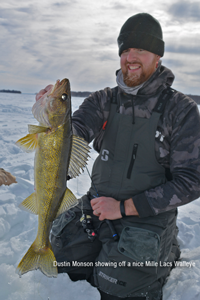 By the time we were all in position and our holes were drilled, it was almost 8:00 AM. Prime time was upon us and with high expectations; we each rigged up our favorite lures and started fishing. It didn’t take long to discover that the fish were really … not biting. The morning run, if there was one, ran somewhere else besides where we were set up. By noon, I think maybe the total catch was about 3 walleyes for the group.

I’ll bet I can come close to guessing what you’re thinking; it could go something like this. “Man that trip sounds like a bust, you guys went to a lot of work for nothing!”

I know the trip didn’t start off so good, but don’t quit reading yet, things are gonna get better. I’m coming to the part about how teamwork, determination and the love of fishing combine to make miracles happen.

Around noon, everybody gathered around the tent where we’d cooked up some hot dogs. While eating some warm food, we talked things over and weighed our options.

Making a big move was gonna be a lot of work and spreading out too far from each other would have defeated the whole purpose of us all getting together. Whatever we’d do, we would do it together and since Dustin felt confident that the fish would move in the afternoon, but believed we missed them in the morning by fishing too deep. He reasoned that while we were positioned over the outer edges of the flat in 22 to 26 feet of water, the fish probably along the shallow breakline. It was true that the fish that we’d caught in the morning came out of shallower water, 14 to 18 feet. So we all deferred to Monson’s judgement and the move shallower began.

It wasn’t all that long before the transformation began, first Chris showed up with a fat walleye, then it was Dustin, then Shane and before I knew it, those boys were running me around in circles on the ice. I was so busy with my camera that I forgot all about fishing and just circulated among the group. 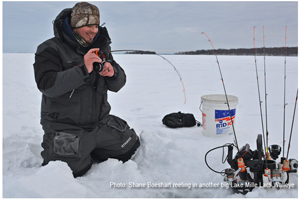 The move to shallower water was obviously the key and from then on, it was simply a matter of tweaking presentations. What fascinated me about that process was the way these guys each had their own idea about how to approach the puzzle and how each one of them used a little different formula to solve it.

For Monson, the large profile and bright flash of a ¼ ounce Gold Lindy Quiver Spoon was used to “call in” fish from a distance. An observation I mentioned about Monson before is that he in on a mission to catch a big fish, he’s addicted to it and he believes in offering up large lures to trigger strikes from whoppers. I watched it work 3 weeks ago and I watched it work on Saturday too! Seeing is believing and I saw Monson catch a half dozen walleyes using his approach, so I believe.

Shane Boeshart on the other hand believes in calling the fish by getting them riled up. I watched him rig up a panfish size 1/16 ounce Frostee Jigging Spoon, tip the hooks with colored spikes and use it for gathering swarms of perch around his bait. “I like to get a bunch of perch under my hole, catch a few of them and try to get the predators interested. They swim into the area when they get curious about what’s causing all of the commotion;” Boeshart said.

Once he’s got the fishes attention, he reaches over to his strategic control and command center where he’s got a half dozen rods pre-rigged with a presentation for every situation. No kidding, he had Wally Talkers, Quiver Spoons, Rattl’n Flyers; everything rigged and ready so there’s never a delay.  On Saturday, it was the 1/8 ounce Glow/Chartreuse and Gold Quiver Spoon that emerged as his favorite. Seeing is believing and I saw Boeshart catch a half dozen walleyes using his approach, so I believe. 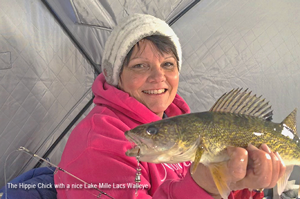 Chris Messerschmidt moved through his arsenal of lures too, but used a more traditional approach. He’d open up his box, select a lure and try it for a while. He caught fish on several lures, but when he tied on the Firetiger lindy Glow Spoon, his action was steady. In his own words; “Had a blast on Mille Lacs yesterday and had my best day of the ice season. Got to fish with some good people and I have a new confidence lure, the Lindy Glow Spoon in firetiger!” Seeing is believing and I saw Messerschmidt catch a half dozen walleyes using his approach, so I believe.

For me, there was a lot to be thankful for on lake Mille Lacs this weekend. In this busy world, it's not often that we get to make new friends and if I'd waited any longer, I'd have missed my chance. Spending a day on the lake with these guys was as fine an experience as anyone could hope for and good fishing was a bonus.

Cold weather, transportation problems and a finicky, late season walleye bite is enough to keep most folks at home in front of the TV; not these fellas though. Step by step, hole by hole and lure by lure, these boys made the fish bite using sheer will and determination. And there's this from The Hippie Chick; "Just think honey, if you wouldn't have dragged me out of bed at 3:00 AM and driven me through the dark in -20 degree temperatures, then I never would have gotten to see this gorgeous sunrise!"

So there you go, what could have been a short story about a slow day on the ice was transformed into one of a gorgeous sunrise, good fishing, good cheer and new friendships — all for the love of fishing.

As always, field reports from anglers on the ice are always welcome. Let us know what you've seen and what you've done!